The Windows 10 Task Scheduler can run programs on a periodic schedule.  I found this tutorial helpful:

New PC and troubles with PCMover

It's been five years and I got a new PC.  Bigger and faster.  Now I've got to transfer everything over from the old PC.  Alas I got burned again by PCMover, same as the last time.  I'm making this blog post so maybe I will avoid it in future.

The problem with PC Mover Pro is that you think it does more than it does.  I have the illusion that you plug both PCs in an Ethernet router, start PCMover on both and shazam.  But no.  It starts OK then it gives a vague message about network problems and stalls, so little or no progress is made.  (The same thing happened to me five years ago.) And it's up to me to debug what's wrong.  If it can't fix the problems itself, it ought to at least diagnose what is wrong and not leave me to guess.  I'm disabling services, turning off firewalls and anti-virus and still no work.  I give up.  It's easier to transfer the data files using Windows, and then re-install the programs.  No mysteries there, it just takes time.

Install on my new PC:

Uninstall on my new PC:

Posted by RichardG at 3:22 PM No comments:

So we got one of these when we added on to the house in 2006.  It centralizes connections for cable TV, telephone and internet.  We've had more people staying with us than usual and the WiFi has been so slow.  It finally dawned on me that this GE box was a bottleneck.  It has an 8-port Ethernet switch but the speed is only 10/100 mbps.  I got a NetGear gigabit 8-port switch for $39 and used that in place of the built-in slow one.  The GE box had enough room for it and a spare electrical outlet.  Very easy fix and now it's all fast and stuff. 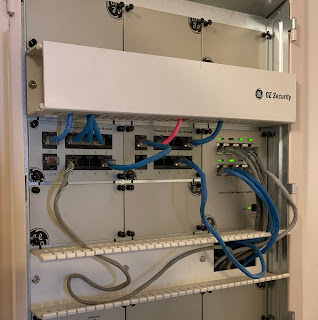 Posted by RichardG at 8:38 PM No comments:

If you have an AT&T cell phone and it's paid for, you can unlock it (for free) at the AT&T Device Unlock Portal.  The advantage of unlocking your cell phone is this:  if you travel abroad, you can buy a prepaid SIM card in the country you travel to, and swap it for your usual AT&T SIM card.  This will give you cheap voice and data access in the foreign country, compared to AT&T's foreign roving plans.  When you return to the US, you can switch the SIM card back.

Posted by RichardG at 8:08 PM No comments:

My new setup.  I've got a 34" ultrawide LG monitor (5120x2160), Mackie 4" speakers and the Microsoft Sculpt Ergonomic Desktop and Mouse.  I also got the Sculpt Comfort Mouse and Sculpt Mobile Mouse. 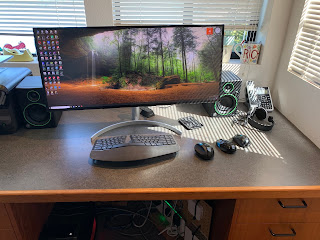 All three mice work at once, but I only use one at a time.  They each have an on/off switch on the bottom.  The Comfort Mouse is the only one that is pure Bluetooth. The others communicate via a USB dongle. The dongles each store inside their mouse when not in use, which is a good idea else they'd get lost. The Ergonomic Mouse is big - almost as big as Doug Engelbart's original three-button wheel mouse from the 1970s.  The Mobile Mouse seems the most accurate for close work.  The wheel on all three has the nice feature that it can scroll sideways, as well as up and down. All but the Mobile Mouse have extra buttons that you can program.

The Sculpt Ergonomic Keyboard takes some getting used to.  I've been using a split keyboard but this one tilts up on the side closest to me.

Posted by RichardG at 2:36 PM No comments:

It seems like a long time from when this 5120x2160 monitor was announced until it became widely available.  At any rate, I finally got a LG 34WK95U-W and it's a beauty.

Before hooking it up, I needed to get a better graphics card.  I'm not a gamer so I don't need one of those high-priced power-hungry cards, but my old NVidia GeForce GTX 745 was insufficient.  I upgraded to a 1050 Ti with 4GB of memory.  It's priced reasonably, it's not too big for my motherboard (a 2015 HP) and it works with motherboard power.  I connected with DisplayPort 1.4.  The cable for this came with the monitor.

Installing the monitor was made harder by the skimpy documentation.  You'd think they would do better.  But I did figure it out.  The screen is beautiful and I love all that real estate.  I can have two or even three documents up at once.

Posted by RichardG at 5:04 PM No comments:

I have ReSound hearing aids that I got from Costco.  They work fine and connect to my iPhone.  As near as I can determine, they use a non-standard version of Bluetooth to communicate.  I have tried to connect them to my Windows 10 computer, but no luck.  I can pair them via Bluetooth but they never show up as a sound device.  A standard sound device like Bluetooth headphones would show up automatically.  You can use these hearing aids fine with iOS and Android devices, but I believe they do not work with Windows devices, and likely not with Linux or Mac either.

HearingTrack.com summary
Posted by RichardG at 12:54 PM No comments: